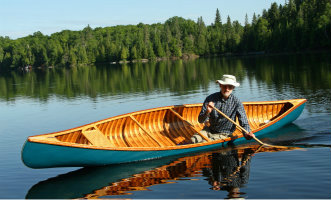 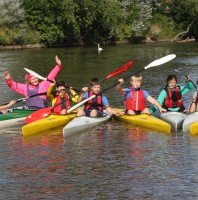 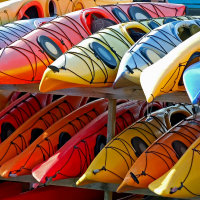 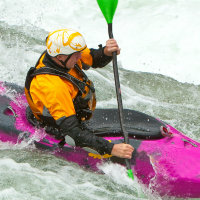 We did some coastal kayaking in Fuerteventura in January 2015 with Kayak Fuerteventura. After a previous leisurely trip to Lobos Island with some relatively inexperienced paddlers we took a second trip along the cliffs to the South East of the Island. We had asked Juan and Jorge to take us somewhere suitable to put a few miles in and see some different  scenery knowing that they would choose us a good venue based on the prevailing weather conditions.

As it was forecast to be quite windy and with a moderate swell they suggested this venue as it would be protected from the prevailing North Easterly winds by the cliffs and the sea would be fairly calm. 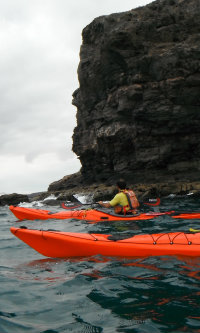 Jorge collected us from the hotel and was our guide for the day. We got to know a bit about each other as we drove for just over an hour to the beach we were to depart from in Giniginamar a village with all of three roads and a dozen or so houses.

As promised we both had P&H Scorpio’s with the low volume version for Sue. The fittings were great, easily adjusted to suit our size and also as promised Jorge had brought some crank shafts for Sue to try. After a bit of puzzling over which end went where (tricky when you pick up two left hand blades by mistake!) we got them set up.

The plan was to paddle West for about an hour, have a break and paddle back to the beach we had started from for lunch at the tiny café and then paddle East in the afternoon into the prevailing wind which was likely to be picking up by then returning with the anticipated swell  / waves.

As we set out it became apparent that the coast was just as deserted as we had been told. There was a fisherman on the first point whom we quickly passed and then we were on calm seas paddling past black cliffs interspersed with the odd pebble beach. We decided the pebble beaches were quite reminiscent of Welsh pebble beaches.

We got excited at the sighing of what looked like a seal (even though we knew there were none in the area) . The seal turned out to be the head of one of a couple of divers enjoying the same unspoilt stretch of coastline.

An overhanging rocky ledge proved to be the roost for a few pigeons and some crabs and we were followed for a while by a Heron. We paddled as far as Tarajalejo ( I think unless it was La Lajita, no doubt Jorge could have told us), took a quick breather to drink some water and headed on back.

By the time we got back to Giniginamar we were ready for a bite to eat and the use of the bathroom at the café. With the benefit of hindsight a stop on one of the remote pebble beaches would have saved us from crossing our legs for the last 20 minutes! Over drinks at the café Jorges talked about the tides and waves around the island and we exchanged paddling stories as only paddlers can.

As predicted we set out into a stronger breeze in the afternoon, we stopped to watch the seas making big sprays of water from an underwater hole and avoided getting wet then, after playing around the rocks on the shoreline and the small incoming waves, we headed up the coast into a more moderate swell.  Hitting the wind and swell we all put our heads down and enjoyed paddling a bit harder as we headed to the harbour walls of Gran Tarajal.Gran Tarjal was the first sign of life we had seen since leaving our lunch stop.

Not being particularly pretty spot we took a breather and then headed back the deserted coastline being much more appealing. As we paddled back we had the wind on our backs and the swell with us. Mike and Jorge managed to catch the odd wave that was steep enough whilst Sue tried but failed to have the strength to get her boat moving fast enough, very frustrating! Sooner than expected we rounded the corner to see the quiet beach and Giniginamar around 4:30pm.

As we packed up the local character (nice way of putting it!) tried to relieve us of “a Euro for a Beer” but left us alone to stagger down the middle of the road. Again dropped back at our hotel we were able to do justice to a good meal that night.Our thanks to Jorges for a lovely days paddling. We look forward to further exploration in Fuerteventura sometime in the future. 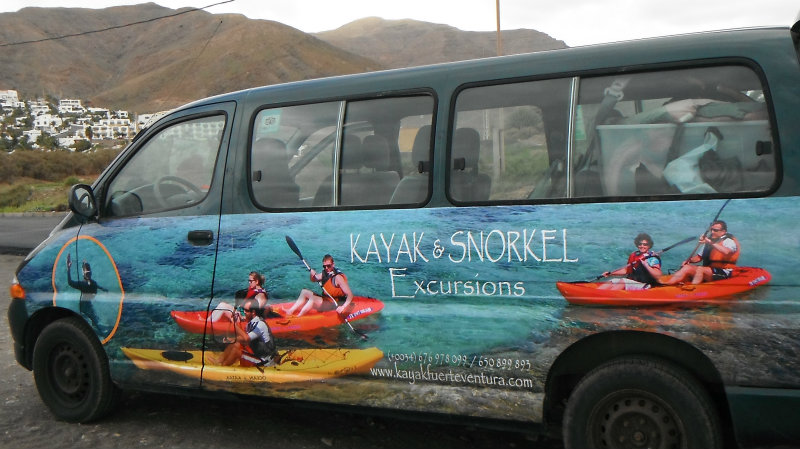 Jorge took some photos which you can see here. For some reason they say they were taken in March but they weren't! It was January. 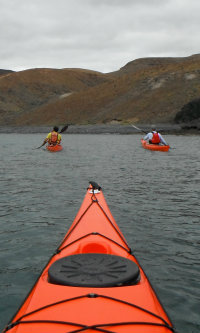 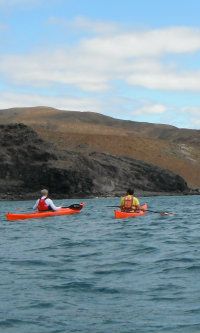 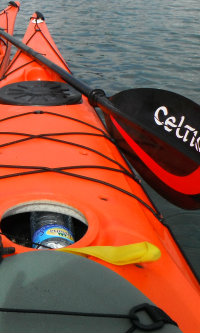